By the time the Regency time period came around, sending letters to your special valentine was a firmly established tradition in England.

While a few manufactured valentines were finding their way into shops, mass-produced, pre-printed valentines similar to what we see today (minus the cartoon characters) didn’t really make an appearance until the mid-1800s. Therefore, when our handsome heroes gave valentines to our heroines, they had to make them.

You can check out an article about  antique valentines here. You can learn more about the particular valentine pictured at left here.

My oldest daughter is in preschool this year which means she’s going to have her first Valentine’s party. Since I’m making a deliberate attempt to make me and my family healthier this year, the last thing I want to do is send candy to 24 preschoolers and have the leftovers sitting around the house.  I am also on a mission to clean out and organize my house so the second to last thing I want to do is send her to school with little pieces of meaningless, useless paper to go home and clutter up everyone else’s houses.

So we made valentines. I got on the handy, dandy internet and started looking for non-candy, non-pointless valentines and I found these.

See? They have a point.  <enter big cheesy grin here>

I love these valentines! They are cheap, practical, and really easy for my daughter to put together herself. While the kids might not be excited about pink and purple pencils, I know there are some moms that will be happy to get something besides candy and cartoon characters.

As a bonus, because I had to get this post ready, these valentines are actually done early! I won’t have to stay up on the thirteenth taping construction paper flags to valentine themed pencils. My husband is so proud.

If you’re looking for some creative valentine ideas, check out Family Fun’s website. They have a lot of ideas with and without candy. There are even ideas for teacher gifts and things like that.

What about you? Do you make your valentines or buy them? What’s the most creative valentine you’ve ever seen?

Naomi here, and we’re talking about weddings today. More particularly, wedding hotspots. In today’s society, destination weddings seem to be growing in popularity. A person can’t just get married in a church anymore. Oh no. We have to fly to Hawaii, trade vows on a Jamaican beach at sunset, or visit the Florida keys in order to have the perfect wedding. Does anyone get married in a plain old church anymore?

In Regency England, church weddings were all the rage. They had to be. It was illegal to get married anywhere else (unless you were super rich and bought your way out of the church deal, but we’ll get to that in a moment).

According to the Hardwicke’s Marriage Act of 1753, if a couple wanted to marry, they needed:

Then the marriage itself had to:

As you can well see, the British Government was gracious to all those poor people wanting to get married two hundred years ago. And the sad thing is, England has so much lovely scenery. You know those beautiful White Cliffs of Dover? Do you want to get married there at sunset? Regular folk likely couldn’t have, though there were two ways around the tedious list of marriage regulations.

However, there was a more dramatic way to circumvent the Marriage Act of 1753: Elope. The Hardwicke Marriage Act was only law in England. Scotland didn’t adhere to such strict marriage regulations, and towns along the Scottish/English border became a popular place to elope, (especially if the bride or groom was under 21 and didn’t have parental consent). Today people fly to Vegas; in Regency England they rode four days (or more) from London to Gretna Green, Scotland. Or Coldstream Bridge, Lamberton, Mordington, or Paxton Toll.

For those wealthy, law abiding citizens not wishing to circumvent the Marriage Act or do something so extreme as to marry out of doors, the place to get married was St. George’s, Hanover Square. Interestingly enough, St. George’s is not located on Hanover Square itself, but a block or two away. It was located in the fashionable place for the ton to live when in London: Mayfair.

The church held about 1,000 weddings per year in Regency times, which comes out to three weddings per day. And remember the majority of these weddings had to take place between 8:00 am and noon. Can you imagine getting married there? Maybe, if you were lucky, you would have had the church for a whole hour before getting get kicked out so the next bride in line could have her turn. Which makes me equate St. George’s to a modern day Las Vegas wedding chapel.  The record for marriages at St. George’s was set in 1816, with 1,063 weddings, including nine on Christmas Day.

So there you have it, Wedding Hotspots in Regency England, and the reason why those places were so hot: The Hardwicke Marriage Act. 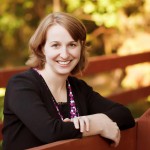 A mother of two young boys, Naomi Rawlings spends her days picking up, cleaning, playing and, of course, writing. Her husband pastors a small church in Michigan’s rugged Upper Peninsula, where her family shares its ten wooded acres with black bears, wolves, coyotes, deer and bald eagles. Naomi and her family live only three miles from Lake Superior, where the scenery is beautiful and they average 200 inches of snow per winter. Naomi writes bold, dramatic stories containing passionate words and powerful journeys. Her debut novel, Sanctuary for a Lady releases in April of 2012.

Welcome to Regency Reflections: The Inspirational Regency Reader’s Companion. Whether you are a long time fan or just discovering this wonderful time period, we hope to be a valuable resource for you. Here you will be able to reach out to your favorite authors, learn more about the history of the Regency, and connect with other readers.

On Mondays you can sit back with a cup of tea and learn a little tidbit of history.  Ever wondered why the period is called the Regency? Maybe you would like to find out a little bit more about how people went visiting or what dances they did. You never know what you might learn!

Wednesdays are when we like to share a little bit of ourselves with you. You’ll learn about what’s going on in our lives and be able to share in the conversation yourself. We’ll also interview your favorite authors whenever they have new books coming out so you’ll always know when Regency titles are going to be hitting the shelves near you.

Fridays we want to take you on a journey of faith. We’ll post short devotionals or lessons God has been teaching us. Strengthen your faith by walking with us.

Periodically, we’ll also be telling you about some of our favorite other Regency related media, such as websites, movies, or classic regency novels that have inspired us to write.

Take a moment and look around. You can vote in polls about currently available books or troll around the links section and visit your favorite author’s cyber home. Move on over to our home site, www.inspirationalregency.com, and look up the answer to some historical question you’ve always had.

We are excited to start this project and are so glad you’ve decided to join us! If you want to know more about who we are and who will be sharing with you over the next month, go to the blog editors page. You’ll find the link under the Regency church picture above.

Is there something you would like to see us cover? Maybe you have a burning question for one of our authors? Just want to tell us how excited you are about the blog? Leave us a comment below. We’d love to hear from you.

Laurie Alice Eakes discusses the Regency and her latest books on KNEO Radio. Catch the broadcast live here at 1:00 CST or replay it at http://www.kneo.org/programs/local/author.html.

Regency Reflections, the blog for Christian Regency (Inspirational Regency) is launching February 2012. Please come back for a visit, a mild cup of tea, or spirited negus.