Kristi here, with an exciting look at the coming year.

As the weather blows cold and snow dumps over a lot of the United States, things are heating up at Regency Reflections. If you’re just now stumbling across our little corner of cyberspace, take a moment and bookmark us or subscribe via email because there are some amazing things planned for 2013.

In February we’ll be celebrating our first birthday and we have some serious fun in the works. As a blog for readers of inspirational Regencies, we wanted to give you something to, well, read. We’re also putting together a unique and eclectic give-a-way that you won’t want to miss.

More than half of our authors have book releases this year as well as many of our Regency writing friends of the blog. This year is going to provide a plethora of choices for the inspirational Regency reader. We’re especially excited for the debut releases of Vanessa and Sarah!

Other things to look forward to this year are a series of guest bloggers ready to share their experiences and knowledge, fun give-a-ways, and increased opportunities to interact with some of your favorite authors and other readers.

What are you looking forward to this year? What would you like to see more of on Regency Reflections? 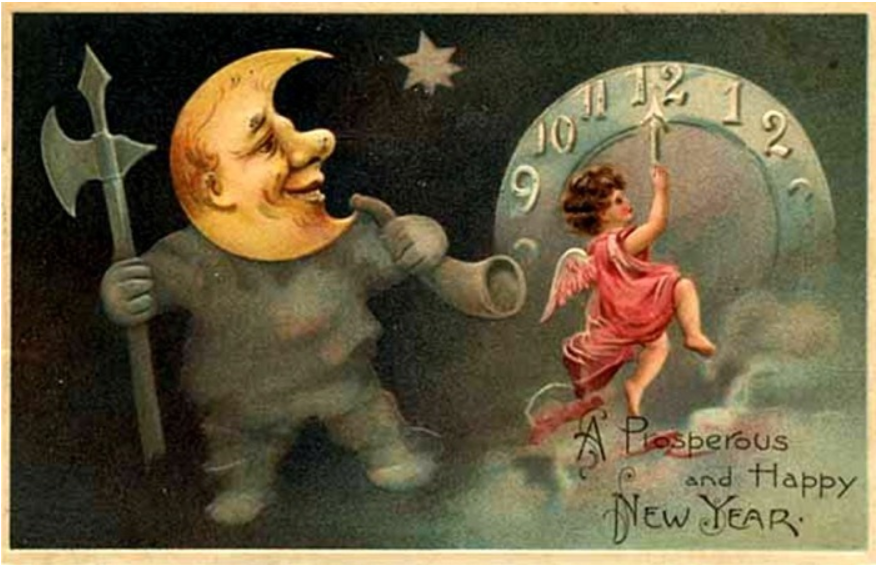 It’s New Year’s Eve and it seems we’re all experiencing a bit of “Cinderella Syndrome”… We have up until midnight before 2012’s party comes to a close and a new fairy tale is ushered in.

It’s exciting, isn’t it? The slate is wiped clean and anything is possible in the new year! We’ve got a new chapter to write in our lives. We’ll have a new story to tell. And whether we’re singing, dancing or making merry on this happiest of holidays, the door to possibility is wide open with the simple tick of the clock!

So how will we spend those final moments of the year? Some of us may revel in the possibilities – What delights will the new year bring? (Eat, drink and be merry, maybe? Luke 12:19) Others might look back to days gone by – Shall we sing another chorus of Auld Lang Syne and think fondly on years past? (After all, there is a time for everything under heaven. Ecclesiastes 3:2-8)

Maybe you’ve joined in with the enormous crowds that link arm in arm at New York’s Times Square and sway back and forth while the familiar notes play. Possibly you’ve watched as director Frank Capra’s iconic character George Bailey comes to truly appreciate the years he’s lived and joins in with the singing at the end of the wildly popular Christmas film, It’s a Wonderful Life (1946). Or as you circle around the fireplace with loved ones near, maybe you’ve hummed along with the notes to ring in January 1st. However it’s celebrated or sung, this song is ingrained in our American culture and in those English-speaking countries around the globe. Arguably, it is the song to define the transition from one year to the next, whether we joyfully welcome the new year or lament on days long past… It signifies the transition from the Christmas holiday season to the possibilities of the new year beyond.

Often referred to as “the World’s National Anthem” (because of the association with New Year’s celebrations the world over) and “the Song that Nobody Knows” (because the tune is recognized but the lyrics often forgotten), Auld Lang Syne was written by celebrated Scottish poet and lyricist Robert Burns in 1788. Conflicting accounts state that it was an original work penned by Burns, while others reference his compilation of James Watson’s formerly published ballad “Old Long Syne” (1711). Nevertheless, Burns’ version was included with other compiled and original works for a collection sent to the Scots Musical Museum publication with the following note:

“The following song, an old song, of the olden times, and which has never been in print, nor even in manuscript until I took it down from an old man.” (Lindsay, Maurice. “Auld Lang Syne”. The Burns Encyclopedia. 1959)

While the literal English translation for Burns’ Auld Lang Syne  title is “old long since”, there are many interpretations that have made their way into popular culture: “long, long ago”, “days gone by”,   and “old times” to name a few. I especially love the contemporary connection to the phrase “In days of auld lang syne”, which Scottish novelist Matthew Fitt used to liken his retelling of fairy tales to the familiar storybook beginning, “Once upon a time…” From Elvis Presley to Billy Joel, Rod Stewart to Prince and Miles Davis, modern-day celebrities have taken turns performing their renditions of the popular song as a part of accepted holiday revelry. Most recently, actress Lea Michele (of Glee fame) sang her own version of the song in the 2011 film New Year’s Eve. (It was not my favorite film by any stretch of the imagination, but Lea’s rendition of the much-loved song was fresh and electric!)

Whether we feel like Cinderella or not, it won’t be long before the clock on the wall clicks over to midnight and we’re all officially a part of 2013.  As we all join in the celebration of a new year, I hope you’ll take a look at the lyrics and as the familiar tune begins to play, remember the magic in the words written so long ago. (You just might be the only person to get the words right if you’re caught singing in the Times Square crowd! <wink>) Like the Bible, which was written so long ago but has truth that still breathes life today, Burns’ version of Auld Lang Syne has managed to stand the test of time from the Regency Era to 2013.

We here at Regency Reflections hope that you not only have the memories of days gone by to keep you warm in the upcoming winter months, but we pray for God’s loving provision to bring you joy in the all the years ahead.

May you be richly blessed in the new year and beyond!