Susan here — let’s take a light look at the Prince Regent — the namesake of our beloved Regency period. Born in 1762, died 1830, King George the 4th (Prince Regent) was one of 15 children. The oldest son of King George the 3rd, he did not follow his father’s conservative ways. He was Prince Regent from 1811 to 1920, and then king for ten years. 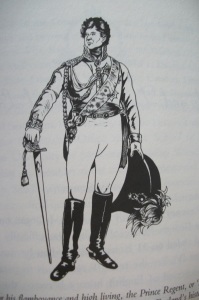 Age at ascension to the Regency: 49

Age at ascension to the throne: 57

Took unjust credit for: British victory in Spain, and the overthrow of Napoleon

Was firmly convinced that: he fought in the Battle of Waterloo

Famous book dedicated to him: Emma, by Austen 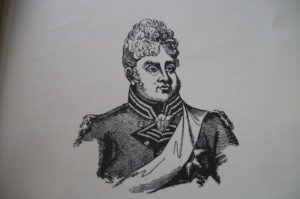 Information about George the 4th (the Prince Regent) is accessible and understandable. I recommend a brief study of his life to better frame your Regency knowledge.

Who’s your favorite historical figure of the Regency?

If you’re reading this blog, chances are you are a fan of the Regency fiction genre. You’re all about high-waisted dresses, chaperones, Almack’s, Gunther’s, house parties, and more.

But do you know why there ever was a Regency? It was madness! The madness of King George III. His health required the contingency plan of a prepared handing off of the reins of power – this plan laid out a form of emergency government/royal powers which was known as the regency. It’s a situational set-up for when a monarch is unable to fulfill his duties.

You can’t uncrown a living king, right? So, in their wisdom, the high advisors of the land made the Prince of Wales, eventually Goerge IV, the Prince Regent.

King George III (king during the American Revolution) had a disease now thought to be Porphyria. Porphyria is a rare blood disease and drove the king to complete madness and seclusion in 1810.

For Americans, King George III is a vaguely hated figure, because of the Revolutionary War, but he doesn’t sound all bad. His nickname was “Farmer George” due to his keen interest in agriculture. Said to be a devout Christian, he was a dedicated, yet repressive parent (not enough grace?), a faithful husband, and a plain-living man. The information about his interests is fascinating, if you decide to learn more, and the manner in which his first born son rebelled is an instructive cautionary tale.

Do you enjoy knowing the nicknames of historical figures? If you know some, please share in the comments.

“Poor woman, I shall support her as long as I can, because she is a Woman and because I hate her Husband.” This is what Jane Austen wrote of Caroline of Brunswick, official wife of the Prince Regent.

Besides making this shockingly feminist statement for the time, Miss Austen spoke support of a woman who was hated by her husband and popular amongst the common folk. She caused contention everywhere she went, dividing families, politicians, and society itself.

The prince married Caroline in 1795 because he was in debt and Parliament agreed to give him more money if he did so. Caroline of Brunswick was imminently suitable on paper. An alliance on the continent was important. Caroline was of high birth.

She was also outspoken and unhygienic. She spoke her mind without tact, and she didn’t change her clothes enough. Nor did she bathe often enough. She and the prince were disgusted with one another, as she considered him fat and not as handsome as his portrait. Caroline claims that George spent their wedding night under the grate, where he had fallen down drunk.

Despite their distaste for one another, they did produce a daughter, Charlotte, who became a pawn in the battle between her parents. Caroline was forbidden access to her daughter except for arranged visits, weekly at first and then less frequently. The prince used Charlotte in an attempt to keep Caroline under control.

Caroline, however, was rarely in control. She gave elaborate parties and adopted children, giving rise to rumors that at least one of them was her own illegitimate offspring. As early as 1806 set up enquiries as to whether or not Caroline had committed adultery, a crime.

Until her death in 1821, the social battles continued. When heads of state visited England in 1814, the queen would not allow Caroline to visit the drawing room to meet them. She showed up at the theater they were attending with her husband.

Shortly afterward, however, she left England for Italy, where her behavior became even more scandalous. She hired an Italian man who, by all reports, was more than a servant, sharing her dinner table the least of their improper contact.

So when the Regent acceded to the throne in 1820, he wanted rid of Caroline; he did not want her to be his queen. She stood trial for adultery and was removed from her position. George IV was crowned without her presence. Indeed, when she tried to attend the coronation, she was blocked at every entrance to Westminster Abbey.

In reading several accounts of Caroline and the years of her marriage to the Prince of Wales, I could not find much sympathy for her in my heart. Although Prinny did not treat her well, most of her woes she brought upon herself.

She died in 1821, possibly of a bowel obstruction, possibly of cancer, or possibly from poisoning, an ignominious death for an ignoble life of a woman who could have been a queen.

Laurie Alice Eakes is the author of four novels set during the Regency, as well as a dozen other books. You can find more about her and her books by following her on Twitter @LaurieAEakes or on her web site http://www.lauriealiceeakes.com.

Any Regency aficionado knows that many of our stories are set in the years 1811-1820 when George IV, Prince of Wales was made the Prince Regent. In the Regency Act of 1811 Parliament determined that King George III was unfit to rule. But what do we know of King George III, what is the legacy he left behind during the longest reign of a king up to that point in history?

Personally, he married Charlotte of Mechlenberg-Streltitz and bore fifteen children. It says much about the time that, though his popularity waned over his reign,England’s populace was always proud of him for being faithful to his wife of 59 years!

Side note: Queen Charlotte is noted to have African ancestry, from Margarita de Castro e Souza, a 15th-century Portuguese noblewoman part of the black branch of the Portuguese Royal House. English Royal painter captured her appearance without softening her features which was called mulatto in nature.

His two eldest sons, George IV (later Prince Regent) and William IV left him constantly faced with their excessive extravagance, dissolute lifestyles and profligate ways. Both of those sons eventually wore the crown, but died without surviving legitimate children.

That began the reign of Queen Victoria, the last monarch of the House of Hanover.

As king, war was the one constant of King George III’s reign. He oversaw the defeat of France in the Seven Year’s War, and was subsequently nicknamed “The King Who Lost America” from the constant battle with the Colonies’ War of Independence. But with the defeat of France in the Napoleonic War,Britain emerged the world’s leading power, though King George III was not in power when it ended.

In Parliament, bad choices in the men he kept around him, and detesting those he had no choice in appointing, made government stability rare and created a volatile atmosphere with his Prime Ministers and in the House of Commons.

But he was also the first British Monarch to study science, chemistry, physics, astronomy and mathematics. He learned French and Latin, geography, commerce, agriculture and constitutional law. And despite the loss of the Americas, there was great expansion of the empire and trade. The population almost doubled and there were great strides in agricultural methods and advances in technology. The tide of moral and religious improvement which began in the days of John Wesley, kept the popularity of a King whose religious education was wholly Anglican.

Unfortunately, he was far from well during the last twenty years of his life. He had three different bouts with mental illness, but in October 1810 he had a major mental breakdown; even to the point of being restrained in a straight jacked and tied into chairs. He was renamed “The Mad King” and he spent the last years of his life completely blind and deaf but lovingly cared for by his wife and doctors.

It is sad to think that the people finally saw him as an object of sympathy once George IV, was made the Prince Regent. Britain’s people watched and compared him to his son as the Prince Regent squandered the already low coffers of England and kept the dissolute lifestyle his father had hated.