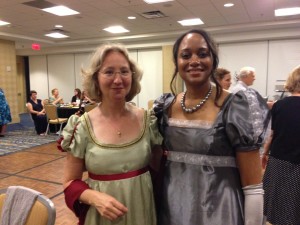 Helloooo, thank you to the Regency authors for letting me join your lovely group. My first Regency is releasing from Love Inspired Historical in September and it was a hoot to write. So much so that I’m at work on another.

A great regency involves just a bit of ruination…at least for the heroine in my current manuscript. But how canI go about ruining her so that she’s forced into a marriage of convenience?

As someone who has enjoyed regency romances since I was a teen, I still have so much to learn. I needed a ruination that was palatable for a Christian audience but still severe enough to force my heroine into the arms of my delectable yet decidedly anti-marriage hero. So the first place I looked was, of course, Google. My dear friend Google.

The search yielded many interesting titles but no specific reasons on why or how a lady could be ruined. I really wanted something concrete. Something unarguable. But that showed my misunderstanding of the Regency period. Thank goodness for writing friends! A dear author friend named who has been writing regencies for years informed me that all it could take is some gossip to rip my heroine’s reputation into tatters.

And so I got to work in creating ruination. After all, my hero and heroine belong together, even if they don’t know it yet!

Has gossip ever hurt you or ruined your reputation? How did you recover?

Many a fictional aristocratic hero had spent a great deal of time at “his club”.  While many clubs of various affiliations and interests were started in the late  Georgian era and throughout the Victorian period, the Regency was dominated by the gentlemen’s clubs marching down St. James Street.

The three oldest and most established clubs set the example. And while many have come and gone since the 1820s, the three powerhouses remain today, still sitting in the same locations our heroes visited.

The granddaddy of the the London gentlemen’s clubs, White’s was first established in 1693, at the site of what would later become Boodle’s.

It started life innocently enough as a hot chocolate emporium, but shifted to an exclusive club and gambling den in 1736. In the late 1700s it moved down St. James street to its current location. Soon after that it became known as the club of those affiliated with the Tory political party.  (A more extensive history of the movement can be found here.)

Though not the only club sporting a bay window, it was the most famous bay window. Being seen sitting in White’s window was a sign of popularity and prestige.

White’s was and is still a men only club. Queen Elizabeth II is the only woman known to have been entertained at the club. Entrance into the club has always been difficult, with an exceedingly long wait list and a discerning membership policy. Today a potential member must be vouched for by at least 35 existing members.

That exclusivity is probably why only one man has been recorded as leaving the club voluntarily. While others have left through death or shameful forced resignation, Prime Minister David Cameron is said to have resigned White’s over there men-only rule.

If the club has a website, I couldn’t find it. Though there are several other London establishments trying to cash in on the popularity and prestige of the White’s name.

Brook’s has been a private club from its inception. In 1762 it started as a private society formed by two men blackballed from White’s. The society then split into two groups, each of which established their own club.

One of these groups consisted of nearly thirty prominent members of the Whig political party. They established the group that would later become Brook’s, though the club was originally named Almack’s because they met at William Almack’s coffee house, very near the prestigious Almack’s Assembly Rooms.

The group moved to its current home on St. James Street in 1778 into a building built by William Brooks, a wine merchant who acted as manager of Almack’s.

While all gentlemen’s clubs were known for gambling, Brook’s gaming rooms were notoriously going day and night.

While Brook’s does not allow women to become full members, they do allow female guests. And while their website is certainly easier to find, unless you’re a member you don’t get more than a pretty picture of the building’s facade.

If you’re wondering what happened to the group on the other side of the split that formed Brook’s, you have only to look down St. James Street to Boodle’s.

While the other group met at Almack’s coffee house, this group, friends of Lord Shelburne, future Marquess of Lansdowne and Prime Minister, met at the tavern. The tavern was taken over by Edward Boodle, from whom the club takes it’s name.

It moved to it’s current location on St. James Street in 1782. It almost closed in 1896, but the members gathered enough funds to purchase the club from the heirs.

Probably the reason Boodle’s is mentioned less in Regency novels is that the club became the meeting place of the gentry while White’s maintained it’s claim to the more senior members of the nobility. While a few titles can be found on Boodle’s membership list, there are considerably more gentlemen than aristocrats.

Boodle’s is the only one of the three clubs that allows female members, though they have their own entrance.

How do you feel about Regency heroes being members of these clubs? Which one would you want to belong to?