Before I start, I’d like to break some news. The Duchess of Cambridge is with babe again!!! The future king will now have a sibling.

With the Succession Act passed in 2011 and all the hold outs territories of St Kitts and Nevis, St Vincent and the Grenadines, and Canada changing their laws to allow a female to become ruler regardless of a subsequent male sibling, a baby George had been Georgette, she would someday be Queen of England. For now this new baby male or female will fourth in line to the throne.

Yeah progress. However, back in the Regency we so love, females taking their father’s position was rare, even more so for the lower titles.

Upon the death of the title holder, the title passes in this order:

So when ever you hear never, always realize that there may be some obscure exception  lurking in the annals of history. In my latest release coming September 29th, Swept Away, Charlotte Downing is given her father’s title in this retelling of Cinderella with a Twist. 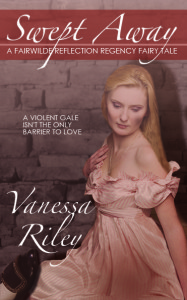 If you could inherit any title other than King or Queen what would it be? I for one, fancy duchess. The Duchess of Georgiaporchdom. What about you?