Thirty days hath September,
April, June and November;
All the rest have thirty-one,
Excepting February alone
Which hath but twenty-eight, in fine,
Till leap year gives it twenty-nine.

Just as young people desiring to bypass all the rigmarole to get married in Regency England could hightail it to Scotland, women could also thank the Scots for making it a law allowing women to propose to men one day a year, every four years on Feb. 29.

woman down, he must pay a fine, anything from a kiss to a pair of gloves or even a silk dress. Another tradition has it that the spurned woman must be wearing a visible red petticoat if she wanted the fine paid. Tradition aside, there is no written evidence on the books of Scottish Parliament’s having passed such a law.

Another legend has it that it was over in fifth century Ireland that St. Brigit asked St. Patrick to allow women to propose to men, since, supposedly, men were laggards in this area. After a bit of negotiating, St. Paddy allowed it every four years on Leap Year Day.

The American Farmer, published in 1827, quotes this passage from a 1606 volume entitled Courtship, Love and Matrimonie:

Albeit, it is nowe become a parte of the Common Lawe, in regard to the social relations of life, that as often as every bissectile year doth return, the Ladyes have the sole privilege, during the time it continueth, of making love unto the men, which they may doe either by wordes or lookes, as unto them it seemeth proper; and moreover, no man will be entitled to the benefit of Clergy who dothe refuse to accept the offers of a ladye, or who dothe in any wise treate her proposal withe slight or contumely.

So, wherever or however the tradition developed, by the time of the regency, Leap Year as a year or a day of female initiative in the romantic sphere was well-known. 1812, 1816 and 1820 were all leap years. Even though the Gregorian calendar had made the bissextile year (having an extra day) official back in 1582, Britain ignored the date of Feb. 29, so legally it didn’t exist. British law conveniently “leaped over” the date, probably because of so many negative superstitions associated with it, especially concerning livestock and crops. Ignoring this day resulted in a tradition of “anything goes”—hence women proposing to men. According to the Encyclopedia Americana 2004 Edition (Volume 17), King Henry VIII’s reign had an English law passed making February 28 the official birthday of “leaplings” or “leapers,” those born on Leap Year Day . 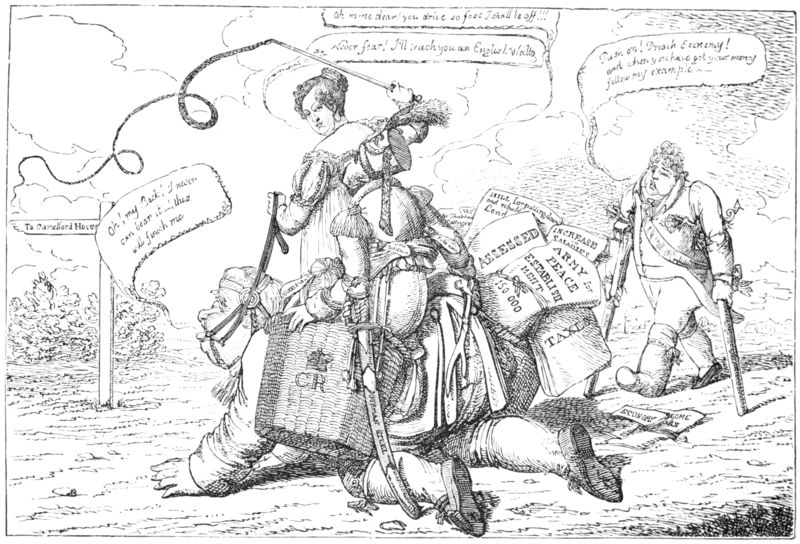 This British political cartoon satirizes the royal marriage of Princess Charlotte of Wales (the Prince Regent’s daughter) to Prince Leopold of Saxe-Coburg on May 2, 1816.

The British Parliament settled £60,000 on the newlyweds, with £50,000 more for the prince should his bride pass away. The cartoon depicts the English nation on its hands and knees, a bit in his mouth, driven by Her Royal Highness with a horsewhip.

John Bull is the national personification of England, the way “Uncle Sam” is to the United States. He is loaded down with packages labeled with all the heavy tax burdens imposed on the populace at the time. After more than a quarter century of war with France, Britain’s people were financially exhausted. The Prince Regent’s extravagant lifestyle and building projects only filled them with disgust and caused a growing number of riots (one reason the Prince Regent preferred spending time at his seaside retreat, the Royal Pavilion at Brighton).

In the cartoon, Prince Regent George supports himself on crutches formed of dragons from his Brighton money pit. “Push on!” he shouts, “Preach economy! And when you have got your money, follow my example.” “Oh! my back,” groans John, crawling under the weight of his heavy burdens. “I never can bear it! This will finish me.”