My list of books to look up is long, but I will be forever thankful to the friend who pointed me to Marion Chesney.

Her A House for the Season series was recommended to me and I pass that recommendation on to you.

The first book in the series is The Miser of Mayfair. It isn’t your typical set-up. 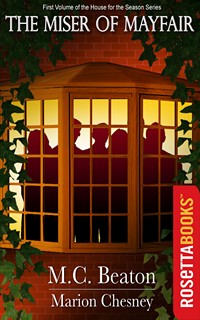 The setting for the series is a home in London, available to rent but plagued with bad luck. This makes the rent ridiculously low, something Mr. Roderick Sinclair needs desperately if he’s going to take his ward to London for the Season.

The ward, Fiona, is not your typical heroine either. It’s very possible that she is a good bit more than she initially appears to be. Which is a good thing, because if she’s going to make a good match, she has an enormous amount of obstacles to overcome. Not the least of which is a lack of funds, connections, or proper wardrobe.

Enter the wily butler, Rainbird, who plots with Fiona to make her and the beleaguered staff of Number 67 Clarges Street a success.

For me, the book was a refreshing look at the Regency world. The style, plot, and story structure are very different than books I see published today, but that only adds to the story’s charm for me.

Unless you’re lucky enough to find an old copy in a bookstore, The Miser of Mayfair is only available through a Kindle reader. If you’re looking for a fun, easy read while you travel this month, give it a try. If you are an Amazon Prime member, you can even borrow it for free.

Have you read The Miser of Mayfair or one of Marion Chesney’s other Regencies? What did you think?

…Back from an absence of about four months (that pesky tax job). Since I enjoy Camy’s posts on older regency books so much, I am bringing you info about a book, and its author, and telling you about her extensive and delicious back-list of regency reading fun (over 90 titles). If the author Marion Chesney is not familiar to you — get thee to a bookstore — or library in this case — since she isn’t (boo-hoo) writing regencies anymore.

No, she now only writes fabulously popular cozy mysteries now and you may know her as M.C. Beaton. However, her regencies are GREAT, and with some digging, are still available to the avid fan. She’s got some of her backlist out as e-books lately, too.

Chesney’s debut (writing under her own name) book, which I happen to own, is “The Poor Relation.” Heroine and former debutante Amaryllis Duvane’s fortunes have sunk low and she is reduced to the status of serving her wealthier relatives. Her past love, the Marquess of Merechester, shows up to court one of these wicked stepsister types, and the drama begins. 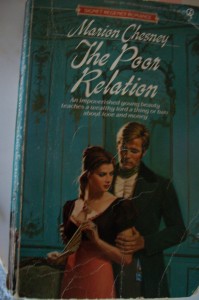 I’ll happily admit to being a huge fan of Chesney, in all her genres. But the chance to read one of her first efforts makes me admire her career trajectory even more. As one familiarizes oneself with her work, it’s clear that as she gained publishing popularity and confidence, more and more of Chesney’s delicious humor comes out on the page. I can only hope to instigate half as many snickers for my own readers…someday…when I make my debut!

If you’ve ever enjoyed Chesney’s regencies, please add a comment. 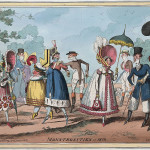 Hi, Regency fans! I got into reading regency fiction when my children were young. I needed something enjoyable, light, and clean to have on hand whenever I had a few spare minutes to read.

One day, at my library, I stumbled across a book from the House for the Season series, by Marion Chesney — the rest is history — regency era history. She’s still my favorite regency fiction author, and I only wish she still wrote in the genre. Following is a list of her prolific output (Enjoy!):

A House for the Season Series[edit]

PS: This is not Christian fiction, but is pretty clean.

Would love to hear from other Chesney fans in the comments. Fondly, Susan