I’ve enjoyed reading this month’s posts about “keeper” regencies—those stories we go back and reread. Even though we’re familiar with the story line and it’s hero and heroine, we once again fall prey to its magic as we open to page one. 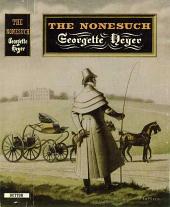 One of my favorite regencies, which I revisit every couple of years or so, is Georgette Heyer’s The Nonesuch. I’ve loved all the Georgette Heyer regencies I’ve read, but a few stand out. I think this latest reread may be my fourth of The Nonesuch. Why is it so special? As Laurie Alice Eakes wrote in an earlier post about her favorite regency, the story line is not terribly unique. In The Nonesuch, the heroine is the classic poor, yet well-educated and high-born, lady, a bit past her prime (aka marriageable age) at 26. The hero is “top-of-the-trees” (aka out of her league). They meet by chance in a village way up in Yorkshire, where she is governess to a spoiled beauty.  He is the typical perfect catch who at 35 has not yet been caught by any woman of marriageable age. He is also a Corinthian, which means he is an athlete, excelling at all the sports popular with regency bucks. The heroine is suspicious of Corinthians because of those who engage in the regency version of extreme sports (like racing their high-perch phaetons), often leading younger men astray. But she is hard-pressed not to be impressed with this Corinthian, who is not only handsome, but considerate, mature, thoughtful, and with a sense of humor to match her own. He also singles her out, so no matter how much she tries to guard her heart, it’s a losing battle from the starting line.

The Nonesuch is a classic Cinderella tale of an impoverished heroine winning her prince’s heart. I am sure I will be rereading it again sometime in the future as well as other Georgette Heyer regencies (Frederica and Faro’s Daughter come to mind).

Last month I blogged here about revisiting and re-editing a regency of my own, The Rogue’s Redemption. It’s now available online at Amazon. Here is a copy of the cover:

What do you think of this rogue’s killer blue eyes? Does the heroine stand a chance? 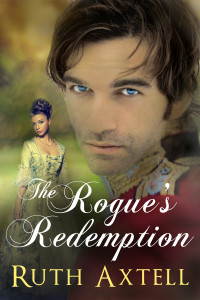 For a description of this and other books by Ruth Axtell, visit her website at www.ruthaxtell.com

Congratulations, Susan Heim, on winning the beautiful hardback copy of Pride and Prejudice. Check your email for details on claiming your prize. See the end of this post by Laurie Alice Eakes for another chance to win a fabulous prize.

Although I have been devoted to the Regency era since the age of fourteen, I never read a book by Jane Austen, nor did I see one of the movie adaptations, for another twenty years. I haven’t even read all of Miss Austen’s books. Instead of this celebrated lady of letters, my attraction to the Regency came through an intermediate step—Georgette Heyer.

For years, I tried to get a copy of A Private Life, a biography of Miss Heyer written by another one of my favorite Regency authors, Jane Aiken Hodge. That tome was never available, so I was thrilled when a new biography by Jennifer Kloester was published. Since I’ve been reading it off and on for the past few weeks (it’s a lengthy book), I thought reviewing it in the month we are celebrating Jane Austen wholly appropriate. My Regency sisters have indulged me, since I am far more fond of Heyer than Austen, as blasphemous as that may be.

Kloester executed a tremendous amount of research for this biography. She must have read a few thousand letters and delved into numerous dusty storage rooms for original documents. The details included are more intriguing—and more edifying—than five minutes of TMZ. This is the book’s greatest strength and greatest weakness. The details about her publishing life, her personality, her friendships and animosities are like juicy gossip, especially to a writer or lover of her books. On the other hand, after a while, as many details as we receive go a little too far. I don’t need endless pages—fortunately scattered—regarding the Rougier (her married name) financial difficulties and mismanagement. Nor do I need the author’s speculation about the couple’s sex life. 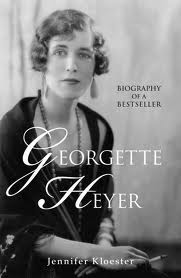 More important are the details about her ups and downs as a published author. More ups than downs from most writer’s perspective. She sold her first book when she was nineteen. One of her detective novels was banned by the Irish government as being obscene (it’s not) until the 1960s. And although it rather makes me sad, I like the details about her personal habits such as how she smoked two packs of cigarettes a day for most of her life. It just doesn’t fit my image of this educated and talented Englishwoman born right after the turn of the 19th century. The ways in which she stayed awake when on deadline make me cringe as much as did some of her business decisions.

A business woman she was not unless one counts that she wrote romances, most set in the Regency, for the money, when her heart lay in long historical novels. She did manage to write these, but other than An Infamous Army, these were not the most successful of her books. Readers ate up her Regency and Georgian romances. They also loved her detective novels. To learn that two of her favorite authors were Jane Austen and Raymond Chandler did not at all surprise me.

That others ripped her off didn’t surprise me either. She exchanged letters with publishers and attorneys regarding how closely Barbara Cartland’s books followed Heyer’s, and wasn’t afraid to say the woman needed to do her own research. Cartland wasn’t the only writer who decided to use Miss Heyer’s original research instead of seeking it out for themselves.

Often I have heard that Miss Heyer made up slang terms and even that she inserted false facts to throw off these pretenders to know the time period and write in the same genre Heyer rather developed herself. After reading the biography, I no longer believe these claims to be true. She possessed too much professional integrity to do so.

Although Miss Austen wrote during the Regency era that has become a subgenre of romance fiction, the subgenre itself, for which we and dozens of other authors keep blogs,  owes its popularity and stronghold to Georgette Heyer.

The love of Regency romance lives on today. Comment on any post this week for a chance to win a book by one of Regency Reflections’ amazing published authors. The winner will be emailed the list of available books to choose from. The winner will be announced Monday, August 26th. Winner’s mailing address must be within the United States to win.