We’re pulling out some of our favorite posts from our first few months of blogging. Many of our loyal readers hadn’t found us yet when these were posted, so we’re giving them a new life.

As football season begins in America, the thrill of sports teams and competitions takes over a good bit of society. Today we pull an article from March of 2012 that looks at the organized sports men and women of the Regency would have gotten excited about. Ah, Spring. When a young American man’s fancy turns to brackets and basketballs and he is likely to put more consideration into picking which college to root for than he did selecting which college to attend. There’s a reason it’s called March Madness.

Kristi here, and the fascination with sports is not a new one. The Regency era saw a culture on the cusp of the organized sporting events. While many games remained unofficial skirmishes, there were several championship challenges emerging by the beginning of the Victorian era. And of course, all of them got gambled on.

In 1711, Queen Anne acquired land near Ascot in which to hold horse races. The first race had a purse of 100 guineas. By 1813, races at Ascot were such a part of the fabric of England that Parliament stepped in, passing an act to ensure the racing grounds remained a public racecourse.

Prinny, the future King George IV, made Ascot one of the most fashionable social occasions of the year. After ascending to the throne, he had a new stand built for the exclusive use of guests of the royal family. The Royal Enclosure still exists today and admittance to it is very difficult to obtain. The Royal Ascot was, and still is, a four day event. It was the only racing event held at the racecourse during the 19th century. England’s elite would gather to watch horses above the age of six barrel through the course in pursuit of the Gold Cup.

The grandeur of the original races continues today in the strict dress code requiring formal day dresses and those infamous hats for the attending ladies. Men must still wear the morning suits and top hats as a nod to the Regency era.

During the early 1800s, fashion was always important to the upper class and the Royal Ascot was certainly no exception. The importance of dressing right for the races even lent its name to the traditional wide morning tie, now known as an Ascot Tie.

The Royal Ascot takes place in June, one of the last hurrahs of Spring Season. 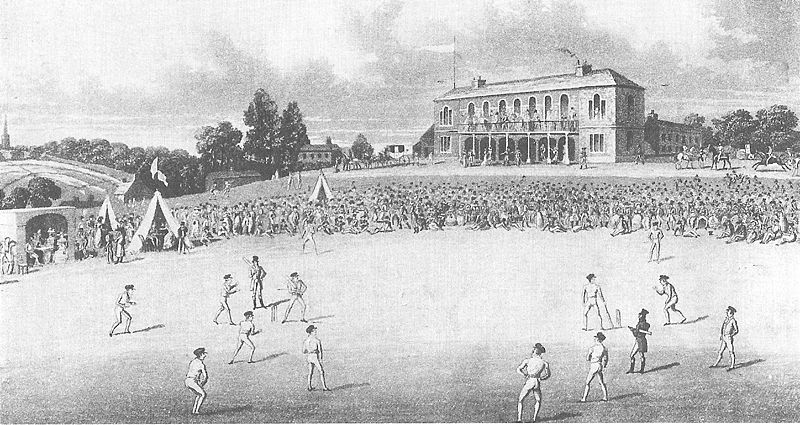 This amateur against professional game of cricket actually skipped over the true Regency. It began in 1806, disappeared for a while, and then re-established as a yearly tradition in 1819. It remained in place until 1962 where is phased out again only to be revived in recent years, with matches in 2010 and 2011.

At the time of conception the Gentlemen, or amateurs, were largely aristocratic men who had played during their school years. The Players were professionals, paid to play by various county cricket clubs.

Unlike professional athletes of today, the professionals weren’t hired to play each other but rather to play the gentlemen that were members of the cricket clubs. Rather like a tennis pro or golf pro at a modern day country club.

The game lasted for three days and usually took place at Lord’s. Not including the most recent matches, the Players had 125 wins to the Gentlemen’s 68. Today the Players are professional athletes from England’s competitive cricket circuit and the Gentlemen tend to be pulled from the University cricket teams. Colleges had always prized physical skill in addition to mental learning, but it wasn’t until the early Victorian era that they began to officially meet each other on the playing field. Prior to this point, most collegiate athletic competitions were between houses within the college.

Cricket and Rowing competitions between Oxford and Cambridge both started in the 1820s.

The Boat Race, as it is still referred to today, began in 1829 and has had a tumultuous history ever since. It would be another twenty-five years before the race settled into being an annual event, but the spirit and drive that propels people from different schools to meet on the field, or river in this case, of athletic competition was alive and well during the Regency. Currently Cambridge is on top, with 80 wins to Oxford’s 76. This year’s race will be held in April.

What sports competitions do you get excited over? What was the last major sporting event you went to see?