We are all familiar with Sense and Sensibility, Pride and Prejudice, and Northanger Abbey – but did you know that Ms. Austen also wrote three prayers? Jane likely penned her three prayers as “evening prayers,” intending them to be read aloud. Let’s take a look:

Give us grace almighty father, so to pray, as to deserve to be heard, to address thee with our hearts, as with our lips. Thou art everywhere present, from thee no secret can be hid. May the knowledge of this, teach us to fix our thoughts on thee, with reverence and devotion that we pray not in vain.

May we now, and on each return of night, consider how the past day has been spent by us, what have been our prevailing thoughts, words and actions during it, and how far we can acquit ourselves of evil.

Have we thought irreverently of thee, have we disobeyed thy commandments, have we neglected any known duty, or willingly given pain to any human being? Incline us to ask our hearts these questions oh! God, to save us from deceiving ourselves by pride or vanity.

Give us a thankful sense of the blessings in which we live, of the many comforts of our lot; that we may not deserve to lose them by discontent or indifference. Hear us almighty God, for his sake who has redeemed us, and taught us thus to pray. Amen.

Isn’t that beautiful? This prayer holds true to Austen’s moving and articulate style and offers wonderful insight to the types of prayers spoken during the Regency. It is important, however, to remember that while the words themselves are indeed lovely, it is not the eloquence of the words that is pleasing to God – it is the attitude with which the prayer is spoken.

You see, prayer is an outpouring of faith, and we pray to strengthen our relationship with God. And how do you strengthen relationships? By sharing your dreams, fears, and desires. God is faithful to hear our prayers, and even if we do not always have the perfect words, God knows our hearts. So I challenge you: Find somewhere quiet where you can be alone with God and have a conversation. Share your heart with Him, and listen for what He has to say.

Vanessa here with a devotion from my heart:

Providence, let me love You like my chosen betrothed. Flood my arms with anticipation, so the pimples tickle the lace of my best ball gloves. I sweep my fan and search for You above the crowds.

With a quickened pulse, I slip away to greet You in the privacy of my hostess’s garden. Let me come to You uncaring of my appearance, unworried about my reputation. Let no concern shadow my heart about my unworthiness of this match. Pray let me not fall victim to my doubts or be persecuted by my memories, the false promises of my past.

I run to You now in the midst of the spring shower with muslin and sarcenet gathered in my palms. My lifted skirts expose my ankles to the soft kisses of raindrops. I twirl in circles trampling my foolish pride with the tender soles of my slippers.  Joy fills my lungs for at last I know it is You who loves me, just as I am.

Let me embrace You like my true betrothed and seek You in the hidden places. The labors of my hands, the burdens upon my shoulders disappear in Your presence. The lightness of Your yoke frees me to sing as Your fragrance, the myrrh and frankincense, anoints the cuff of my sleeve. I smell safety and sense whispers of encouragement. My heart pounds at the softness of Your touch, the shield of protection You gird about me. Though it is I who strayed, I weep at the openness of Your arms, Your forgiveness.

Let me love You in fearless reverence. When the Ton scoff at Your humble beginnings and call You a tradesman’s son, make me not shun You or deny my feelings. I should know now that Your riches provide honor and inheritance for all my generations. Grow my heart to be as generous and as loving. Aid me to be light in this world and a proper helpmate for your ministry.

A wave of shyness grips me. I want to turn, but Your patience draws me. I lower my fan once more and glance at your beauty. There can be no falling away or breaking with You. I shall cling to your promises, your comfort. My lamp is trimmed and full of oil, and I await You, no longer a foolish virgin, but a hopeful bride seeking her Prince of Peace.

I am guilty. I am guilty of loading my plate to high, of volunteering for too much, of getting so busy that I forget to pray. This year I am going to be more consistent. Face it. There are a lot of things that need prayer. I have friends waking up in fear and depression. Truthfully, I counted more sad days that happy ones.

But God is in control. I thank him that the bad wasn’t so horrid, that tomorrow never came. Yet, I am convicted of forgetting or being too tired to do the one thing I can to alleviate the anxiety that wants to take hold.

I’m ordering a new prayer journal to keep me on this path. Yes, I am not just an author but a believer in the product too.

For your free PDF version of the Prayer Journal sign up here. 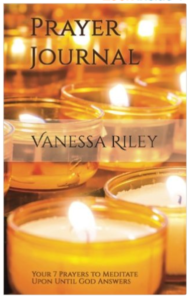 Here is the link to Amazon to order a print copy.