The past weekend marked the opening ceremonies of the annual Kentucky Derby Festival in our fair city. It’s two weeks of celebration from the inaugural event (Thunder Over Louisville, the largest annual fireworks show in the country), including the Pegasus Parade, Great Balloon Race and the many parties leading up to the main event that draw celebrities from across the globe. The festival culminates in the Kentucky Derby (also known as the Run for the Roses), which has long been a traditional celebration of elegance and grandeur for horse racing’s elite.

This year will usher in a new tradition for me personally, as I will attend my first official Derby event at historic Churchill Downs, complete with a British-inspired ensemble and the all important Derby hat. (The Derby outfit, ladies, is quite an important part of the experience!) And though the world now recognizes the Derby hat as a tradition associated with Kentucky’s first Saturday in May, the upscale fashion at the race actually finds its roots in – you guessed it – Regency England.

In the Regency, horse racing was known as the sport of kings – and for good reason. Like the meets at Ascot, Doncaster, Heath, and Newmarket, the Epsom Derby became an affair that in many ways, was restricted to England’s elite. The Regency woman, always fashionable, would plan her ensemble months in advance of a yearly race. Dresses were specifically tailored and could be imported from Paris, Milan and Rome, just for the event. The extravagance of the hats too, were an important aspect of the overall attire. [For a complete look-book of spring Regency attire, including bonnets and hats, click here.]

In the late nineteenth century, businessman Col. Meriwether Lewis Clark Jr. (founding father of the Kentucky Derby and the grandson of William Clark, of Lewis and Clark fame) sought to raise the standard of horse racing in the United States. Upon traveling to London to attend the famed Epsom Derby (with local roots dating as far back as 1618, but its first Oaks Stakes race in 1779), Clark determined that a similar event could be christened along the banks of the Ohio River. He envisioned for the Louisville Jockey Club “…a racing environment that would feel comfortable and luxurious, an event that would remind people of European horse racing.” [Read more at Derbymuseum.org and in Never Say Die: A Kentucky Colt, the Epsom Derby, and the Rise of the Modern Thoroughbred Industry on Google Books. The historical ties to England are fascinating!]

At the time of the first Kentucky Derby on May 17, 1875, horse racing needed a serious image boost. Drinking and gambling were practices that worked to keep women and children away from the track in droves. Without the family atmosphere, Clark knew the business venture was sure to fail. He sought an avenue to make racing something of an elegant event like he’d witnessed at Epsom Downs. What would be key in the pursuit for families to attend the races? Get women to the track. And how to do it? Easy – do it with fashion. He solicited help from the women of Louisville’s elite to go door-to-door and promote the Derby picnic as a fashionable affair.

“Women coordinated their hats, dresses, bags, their shoes and their parasols,” said Ellen Goldstein, a professor at the Fashion Institute of New York. “To go to a horse racing event was really a regal affair. It was just as important as going to a cocktail party, or a ball.”

[Read more in A Brief History of the Derby Hat – link]

Today, the modern Derby fashionista can spend an average $100 to more than $2000 dollars on her Derby hat. (I can assure you the Derby attire of this mother of three will be on one end of the scale. Just for fun, I’ll let you guess which one!) But when each woman steps through the gates to show off her headpiece at the races, she’ll inevitably display a tradition that is decidedly Regency in tone. For if it not for the strong tradition of fashion established once upon a time at Epsom, would we have “the greatest two minutes in sports” as we know it today?

For a little instruction on the “how-to” of hats, here’s how the Royals do a smashing job at Epsom [click here]. And for those of us heading to the Kentucky Derby, some competition you might encounter in the hat department [click here].

Have you been to the races? Which Derby fashion was your favorite? 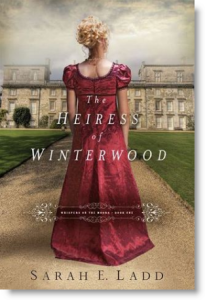 Thanks to all for catching up with author Sarah Ladd and celebrating the launch of her book with us – The Heiress of Winterwood. We are pleased to announce that the winner of last week’s giveaway (the signed book from Sarah) is:

Congratulations Angela! To claim your amazing book, please send an email to:  cambron_k@yahoo.com