Mary here. When considering my post for April, I wanted to follow our theme of fashion. We ladies do like to buy a new frock, new shoes, and to those of the most brave among us, a hat, each Easter Season. My colleague, Susan Karsten, just did an excellent post on the use of shawls in Regency fashion, but when I tried to narrow down a single item of women’s fashion in the ton, it left my head spinning. But then a thought came to me; what of men’s fashion? It was no contest – it could be about none other than Beau Brummel! 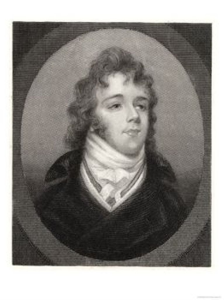 I learned so much about Mr. Brummel in my search that I might have to make a Part II on my next blog to discuss much more on his life, but today, we will stick to his fashion sense.

George Bryan Brummel (1778-1840), though not related personally to the aristocracy, was the son of the private secretary to Lord North, the Prime Minister under King George III. His exposure to that part of Society may have allowed his rise to more elevated circles later in life.

He was fastidious even as a young boy at Eton, and he was nicknamed Buck Brummel, a similar title as prestigious as Beau.

At 16 years of age, he met, and impressed, the Prince Regent with his style and wit. Brummel left Oxford and the Regent gave him a commission into his own personal regiment. Four years later he inherited £30,000, resigned his commission and set himself up in a bachelor establishment in Mayfair. Now, a close friend of George IV, he christened him the arbiter elegante, his Prime Minister of Fashion!

Brummel sought to create a new definition for his understated, but elegant, mode of style. The fop wore bright colors, ill-fitting jackets, knee breeches and high heels. The Beau with his new distinction created the . . . dandy!

Watch the below excerpt from Beau Brummel – This Charming Man:

Trousers, perfectly cut coats, made in black or dark blue against a white shirt and exquisitely tied cravat became the trademark of the beau and were quickly copied by men in the highest social circles of London, and men of superior rank sought his professional opinion on their dress. His fastidiousness in bathing, clean teeth and shaving every day was a pleasing addition adopted in the upper echelons of polite Society. 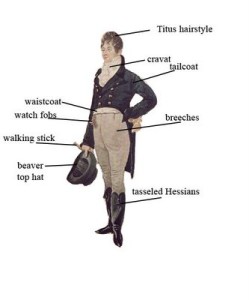 He is almost as famous today as he was in his own time and his name still represents the epitome of fashion. Should you look up dandy in the dictionary, Beau Brummel’s name is linked to the definition. There is a high-end European men’s store in Soho, NY that bears his name. And he has been immortalized by a LeCoultre watch designed with no numbers and a small modern face.