Kristi here. If you’ve ever read a Regency you’ve come across a man wearing a cravat. It’s a staple of early 19th century menswear. We know it goes around the neck. We know a man would be underdressed without one. And you’ve probably come across one described as “intricately tied” or some variation thereof.

Cravats were a great deal more than the precursor to the modern necktie. They were a fashion statement and one of the most changeable features of menswear at the time.

When the cravat first crossed the channel from France it was a simple thing, resembling a scarf knotted around the neck.

Louis XIV of France adopted the fashion after dealings with Croatia. It had the double benefit of being more comfortable than the stiff collars as well as sending all the men scrambling to change fashions.

The idea changed over the years, becoming a simple rectangle of fabric attached behind the neck at one point.

By the time Beau Brummel got ahold of it, the cravat had become much more. Some knots required a hour to tie correctly. Starch also came into play helping the collars and cravats maintain sharp creases and points as well as height. It was not uncommon for collar points to reach into the cheek area.

During the Regency, an intricately tied cravat became more of a fashion statement than an overly embellished neckcloth.

The Art of Tying the Cravat (1828) (Unfortunately some of the pictures are missing from this copy. One is below. You can see the rest here.) 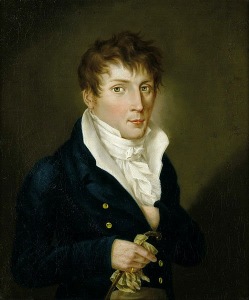 Because of the starched nature of the Regency cravat, a man could go through several cloths in a day.

If a mistake was made in the tying, an incorrect crease would be visible, requiring him to start afresh.

If he changed clothes or the cravat became limp, he had to start again. All to obtain male fashion perfection.

Kind of makes the hassle of tying a tie today seem a little less bothersome.

The idea of a fancy knot is coming back into fashion though. Have you seen the Eldredge or Trinity knots? Or even the return of a real bowties? They could make a man long for the days of cravats and valets. 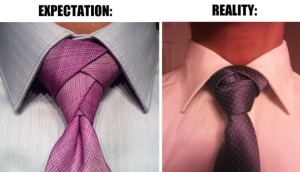 But they sure do look cool.