Imagine you were transported back to Regency England. What would you want to be? A commoner? Peerage? Royalty? Why?

I would want to be in the merchant class. I do believe the women of this class had less societal strictures and could also sometimes help in the family business. Of course, let my fantasy be that of a successful merchant! 🙂 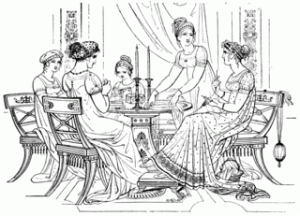 I would want to be what I am today in my own era: a romance writer. I’ve been researching the popular novels of the Regency, and it seems that women authors were quite numerous and prolific. The “Minerva novels” were gobbled up by women readers. They specialized in inexpensive romances and gothic novels, which reader could purchase or take out from “circulating” libraries. Mary Russel Mitford and Fanny Burney were two popular authors who made their living writing romantic novels.

I’m gonna have to go with the peerage, or at least gentry, on this one, for several reason. One, I’m lazy. The idea that someone else would cook my meals and do my laundry has a certain appeal, I must confess. But also, with a higher rank you had the power, time, and money to change things. I would like to have the influence and ability to run a charity or work with the underprivileged. The glitzy parties wouldn’t be bad either. 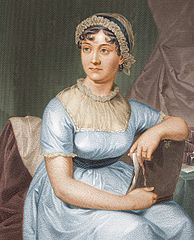 I am not sure I would have been a proper member of the peerage (or royalty, for that matter) in Regency England. I find too much pleasure in the vocation of writing, I enjoy the modern comforts of jeans and coffee shops, and I value the rights women have to cote and pursue our dreams in modern society. I also wouldn’t know the first thing about having a service staff attend to my every whim, so I’d have been a poor member of the aristocracy. I’d rather have been a commoner with some means (so I wouldn’t have to stress about where the next meal is coming from), perhaps a friend that was invited into Jane Austen’s parlor from time to time, so we could write our next novel together? I know one thing for sure – I’d adore the clothes more than anything!

Given the choice, I’d like to be a peeress in my own right like Diana in the Malloren series by Jo Beverley. It was rare and it did happen. The woman had lots of freedom and power other women did not enjoy, even after they married. I’d have to be peerage or have enough rank and wealth to assure my family’s position and a suitable match for my daughter. A house in the country and a townhouse in the city, large enough to host a ball.

I’d prefer to be a commoner. It’s a hard choice to make, because when I think of peerage, they had such a posh life full of luxuries, beautiful clothes, and the best that money could afford them. But so very little of their wealth was earned. Most of it was handed down generation to generation. Plus the upper class wielded so much power on the back of regular, every day people. I couldn’t live with the guilt of spending a year’s salary on a dress. So I pick commoner. Boring and ordinary, yes. Harder style of living, yes. But they were still the backbone of the country.

What about you? What would you want to be?