Up-and-coming author, Naomi Rawlings, fills us in on her exciting new book, released on April 3. Titled Sanctuary for a Lady, it will be published by Love Inspired Historical. Naomi is the young mother of two little boys (5 & 2). She resides in northern 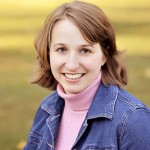 Michigan, just a few miles from Lake Superior.  She shared about the book and some other fascinating aspects of her life.

Naomi, tell us about the book.
The injured young woman Michel Belanger finds in the woods is certainly an aristocrat. And in the midst of France’s bloody revolution, sheltering nobility merits a trip to the guillotine. Yet despite the risk, Michel knows he must bring the wounded girl to his cottage to heal. Attacked by soldiers and left for dead, Isabelle de La Rouchecauld has lost everything. A duke’s daughter cannot hope for mercy in France, so escaping to England is her best chance of survival. The only thing more dangerous than staying would be falling in love with this gruff yet tender man of the land. Even if she sees, for the first time, how truly noble a heart can be….settings are often included in the early Regency subgenre, perhaps for

Even though your story is set in France, it’s considered early 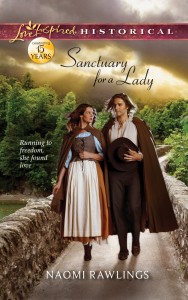 Regency, correct?
French Revolutionary lack of a better place to put them. The French Revolution affected so much during the early Regency period that it can’t be ignored. Sanctuary for a Lady covers from late March, 1794 to early May 1794. Though it’s set during the Reign of Terror, the novel isn’t bloody or gory.  Its main focus is the romance between the hero and heroine, but the guillotine poses a serious threat to both my main characters (as it did to many French men and women during that time).

What, if any were the challenges to writing in this period?
The biggest challenge was finding research sources. There are numerous resources about the peasants and local governments of North West France during the French Revolution, but they’re all in French. And I don’t read–or speak–French. Most English language sources pertain to Paris and the upper class, and my story is about provincial peasants (or almost peasants, as far as my heroine is concerned). Do you have a theme verse for your novel? The verse at the beginning of my novel ties in well with my story:  Colossians 3:13–Even as Christ forgave, so do ye also. Forgiveness plays a very strong role in the novel, though I don’t want to reveal much more beyond that.

Does any of your background in life bear on you becoming a writer?
Those who know me say they can easily see me writing novels, but for me, writing novels kind of came out of nowhere. I’ve always loved reading and did a decent job at writing during high school and college. But as far as writing a novel and getting paid for it goes, the idea never occurred to me until after I’d graduated from college, gotten married, and had a baby. By then, I was reading so much during my baby’s nap times, that I decided to try to write a book, to give me something else to do with my time.

What drew you to be interested in writing Regency Historical Romance?
Not one thing in particular. I get a lot of story ideas, more than I could ever possibly flesh out into a novel, and as it turned out, I decided to set one during the French Revolution. Sanctuary for a Lady has an interesting twist at the end, and I knew Love Inspired Historical was looking for European settings. So I hoped those two things would be enough to get my publisher’s attention, and they were!

What motivates your writing?
I write because I enjoy it and it provides me with a bit of a challenge. I write to entertain people, and I try to write powerful, inspiring stories.

Thank you, Naomi, for sharing your writing journey with us, and for the copy of your new book Sanctuary for A Lady, which you will give away to one of the guests who leaves a comment below!

You’re welcome, and thanks for hosting me, Susan!