On Wednesday, we started looking at the different rights that Regency Era subjects had in relation to their government. We talked specifically about the Magna Carta and Petition of Right of 1628. Today we’re going to continue that discussion and further analyze what protections, if any, the people of Regency England had from their king and his government.

Habeas Corpus is the next major political document that further helped protect the British. If you recall, the Petition of Right declared that a British subject living in England could not be “detained or imprisoned without cause.” While that in and of itself is an excellent protection, it left the actual aspect of imprisonment free for abuse. Say the government had a cause to imprison you. Great. (Well, not really, but it works for our purposes). So you get thrown into prison because you were suspected of stealing a loaf of bread or some such. How long until you appear before a magistrate or a jury of your peers?

Possibly never. Because while the Petition of Right protected you from being wrongfully imprisoned, it didn’t guarantee you a trial. Habeas Corpus guarantees that a person can be take before a court if they so wish.

So did Habeas Corpus protect the average English man and woman? Definitely! In fact, most countries today have their own form of Habeas Corpus (which is still very much alive in the United Kingdom as well).

Our last piece of legislation to look at is the Bill of Rights of 1689 (and yes, this is different from the Bill of Rights in the U.S. Constitution). This bill limited the power of English sovereigns by guaranteeing the king or queen could not: 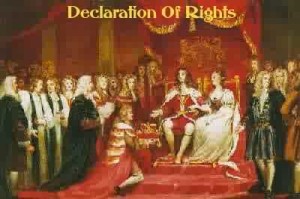 Evidently the British hit on something very important when they came up with the first ever Bill of Rights. I’m certainly glad that people during the Regency Era were afforded such protections. At the same time, my heart goes out the the French and American people for having to fight so hard to secure similar freedoms for themselves in the century that followed.

Okay, thank you for joining me as we explored British rights for the past two day. I certainly hope you enjoyed the discussion.