If you’ve ever read a Regency-set novel, you’ve no doubt run across a description of the heroine’s clothing. It’s one of those things we do. But have you ever stopped to wonder what makes an afternoon dress different from a carriage dress? Or a ball gown different from a dinner gown?

Here is a rundown of a few of the qualities that make a Regency dress fit for the proper occasion. 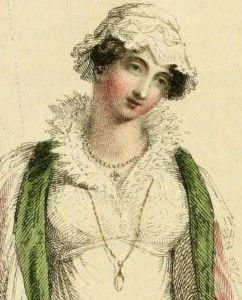 Often times, an old afternoon dress might have the trim salvaged off of it before being used as a morning dress.

Which then does beg the question of what makes an Afternoon Dress. 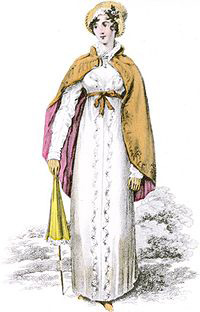 Afternoon dresses were meant to be seen. Afternoons were for going visiting or walking in the park. As these were still day dresses, they had high necklines and full length sleeves. They would, however, been trimmed and fitted to the best of a lady’s fashion ability.

Often the most decorative of the afternoon dresses, a walking dress was for strolling among the masses. Because they were meant to be noticed, care was taken to make sure they were flattering and impressive.

They weren’t, however, always practical since they followed the fashion of the day like everything else, including when it came to the length of the train. 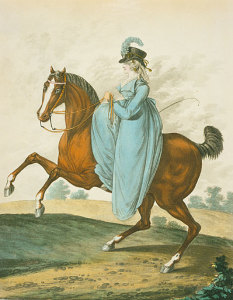 Carriage dresses were made of heavier fabrics, intended to put up with the stress of traveling by coach for long periods of time. The cotton muslin frequently used in walking dresses was prone to wrinkle. Carriage dresses were also less trimmed, since those could get crushed while traveling, particularly if your coach was full of companions.

Riding habits were very sturdy, very simple, and very modest. They would have very full skirts to drape over the lady’s legs while riding side saddle. 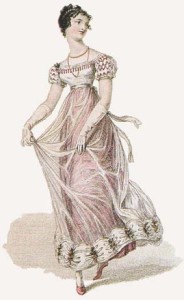 Evening dresses were the finest dresses in a lady’s wardrobe. The fabrics were thinner than the afternoon dress but were also much finer. Silks, satins, light taffetas, and very fine muslins were the fabrics of choice. Sleeves were frequently shorter and bodices were cut lower.

The different types of evening dress were indicated more by the level of embellishment than by the style. A lady’s ball gowns would be trimmed and embroidered to the utmost fashion, with the intention of catching the light as well as the gentleman. Many ball gowns were actually two gowns, with a sheerer gown worn over another. The bottom gown was sometimes colored and the top layer might only fall 3/4 of the way down the skirt, allowing the embellished hem of the underdress to show.

Opera gowns and dinner dresses were, by comparison, a bit simpler. They were still made of fine fabrics, still cut to show off more than a day dress, but were not intended to be quite as impressive as the ball gown. 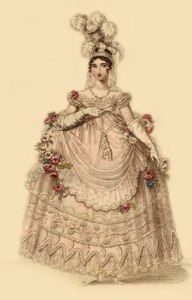 Court gowns were worn for the very special and rare occasion that a young lady went to the royal court. These gowns were a throwback to a bygone era, forgetting fashion entirely in the name of tradition. Wide, hooped skirts, long trains, and overly elaborate hair decorations ruled the court.

When people tried to mix these traditions with modern fashions you ended up with some very silly looking high-waisted gowns with elaborate bell-like skirts.

With all these dresses, it’s a wonder that Regency ladies ever got anything done besides changing their clothes.