Much is made of the fashion trends and inspirations of the early 19th century, but have you ever considered what it took to turn those gorgeous Ackerman’s drawings into actual gowns?

With no sewing machine, no electricity for decent lighting, and no ready-to-wear size guide, creating clothing for the masses was no small feat.

Those of lesser means had to find time to make their own clothing, which meant they often had limited wardrobes and much plainer pieces. Those who could afford to purchase their clothes couldn’t just stroll down to Bond Street and come home with a new look. Purchasing a dress took time.

Fabrics, trimmings, and matching accessories were not all to be found under one roof. While a dressmaker might have a selection of ribbons and beads to add to the piece, the cloth itself came from the linen-draper.

Since fabric making was one of the first industrialized products, inventory at these large establishments could be massive indeed. If a person were particularly indecisive, they could spend hours, if not days perusing the options.

Buttons, ribbons, and other embellishments could be had from the haberdasher. 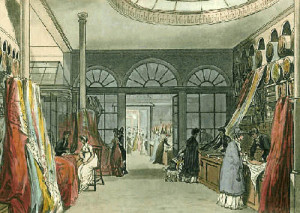 Once at the dressmaker’s, it was time to scour the Ackerman’s drawings and determine the dress you wanted. Some dressmaker’s were also designers and could create unique pieces, but most were altering the drawn designs to best compliment their customer’s figures. Because all pieces were custom made, flattering a person’s individual figure was crucial.

Adorning from Head to Toe

Once the outfit was done, there was still the matter of accessories. Hats were purchased from the milliner. Stockings could be had from the hosiers. For the affluent, even their shoes were custom made. Custom boots were particularly valued amongst men, as they would hold up considerably longer than a lady’s fragile dancing slipper.

Some stores, particularly in less populated areas, would carry a variety of accessories from muffs and bonnets to slippers and reticules, possibly even fabric and ribbons. In the large city, shops could afford to be more specialized.

With all these stops and shops, it’s no surprise that a woman could spend an entire day or possibly even a week selecting a new look. Imagine the time and effort it took to select a new wardrobe, particularly for the upper classes that could wear upwards of four outfits in a single day.

What do you think? Would you like to go through all those steps instead of driving to your local Kohl’s?