Kristi here. Yesterday I had the blessing of being invited to the most epic children’s birthday party I have ever scene. I also celebrated my own birthday yesterday, eating an overindulgence of cake and ice cream.

In the Regency era, birthdays were a very different thing. Unless you were considered a very important personage, such as royalty, your birthday passed with minimum fuss, if at all. 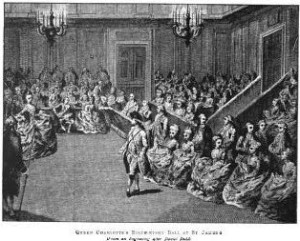 Royal birthday parties were often elaborate celebrations. They were often used as excuses for other political or social purposes. Queen Charlotte’s birthday celebrations were held annually in January or February, signalling a start to the Season. They were also an opportunity for people to be officially presented at court.

The Queen’s birthday, however, was actually in May, closer to the end of the Season than the beginning.

The Prince Regent held a grand fete at Carlton House that was officially to honor the King’s birthday. In reality it was a celebration of his rise to power as the Regent.

Wealthy families would sometimes mark and celebrate birthdays, particular milestone birthdays and those of the heir. Possibly no celebration was as large for these families as the one held on the occasion of the first son’s birth. Large parties and dances would be held to celebrate the heir’s birth.

As you traveled down the social ladder, birthdays became less and less recognized. Perhaps you got a small gift or the honor of eating with your parents instead of in the nursery. If you were very poor, a small piece of candy might be the only thing to mark the occasion.

As time moved into the Victorian era, birthday celebrations slowly shifted into the annual events we know today.

What is your favorite birthday memory?