We hope you enjoyed last month’s celebration of Jane Austen’s Pride and Prejudice. Congratulations to Debra for winning a copy of the 1995 miniseries.

September has arrived and with it harvest is in full swing. September 24 was the traditional medieval harvest day, though much produce was brought in for weeks beforehand and weeks afterward. The Harvest moon is the moon closest to the autumnal equinox and is supposed to be bright enough farmers could keep harvesting by its light. 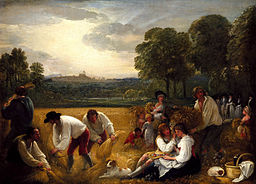 Many traditions arrive with the harvest, and the one I bring up here goes back at least fifteen hundred years and possibly more, as its roots are firmly based in pagan rituals. In The Golden Bough, Sir James Fraser discusses the practice of making the “corn Dolly” at the end of harvest being wide-spread throughout the world.

(For clarification here, “corn” is not the stuff Americans eat on the cob. “Corn” in Great Britain and Europe in general, was any kind of grain—rye, barley, wheat, oats, etc. This is something I see mistaken in fiction set in England and written by Americans.)

In general, the last of the harvest of grain was tied into a sheaf and hung from the final wagon, or was carried by various chosen villagers. These sheaves, tied in various ways, were called the “corn dolly” and represented plenty. Often the dolly was doused in water to represent the rain needed for a good harvest. Some places made a wreath of straw placed on the head of the prettiest village girl. She wore it in a procession to the home of the landowner, where he hung it on the wall. 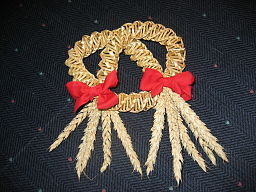 By the Regency, this pagan practice had pretty much ceased, though hadn’t entirely died out. Every area made a different kind of corn dolly, which then took its name from that county or area.

One sweet and symbolic tradition practiced was a simple corn dolly made of three strands of straw tied into a knot to represent the heart. A young man would give it to a girl. If she wore it over her heart, he knew his affections were returned.

Although the more pagan of the corn dolly practices are not something most of us would include in our Christian Regencies, knowing of the practice reminds us of the importance of an abundant harvest to our characters from the lowest laborer, to the highest ranked nobleman.