Congratulations, Merry! You won last week’s prize. Check your email this week for details on selecting your book.

Today and Wednesday we’re talking about film editions of Pride and Prejudice. I suppose 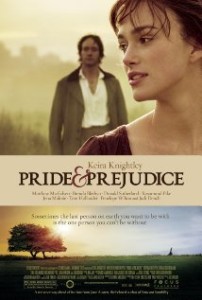 having a film (or motion picture) edition comes with being recognized as a classic book. Nearly every classic I can think of has a film adaptation somewhere. My favorite film version of Pride and Prejudice is hands down the 2005 adaptation starring Keira Knightley and Matthew Macfayden.

So why is the 2005 adaptation my favorite?

The artistic elements of the film put this one over the top for me. The beautiful music. The scene in the rain where Darcy first proposes to Elizabeth. The scene with Elizabeth swinging all by herself and that beautiful piano music in the background. The gorgeous scenery of Lizzie walking through a field reading a book while the sun shines behind her. Those are all things that give this film an extra layer of life. Is the Hollywood adaptation the same as what I’d imagined in my own mind when first reading Pride and Prejudice? Probably not, but it created a rich and complex images and emotions that related easily to my senses. 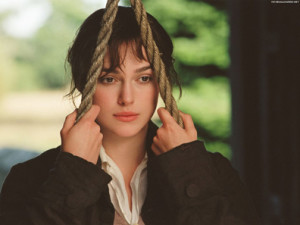 Then there’s the music. Oh the music! It’s my favorite movie soundtrack EVER. I own the CD. I own the advanced piano book. I played one of the pieces for my cousin’s wedding three years ago. And even while writing this blog post, I had to go dig out the book and spend a half hour replaying some of my favorite pieces (like “Dawn” and “Georgianna”). I’ve sat through weddings where the prelude and postlude music was all P&P 2005. If you’re interested in some of the facts about the soundtrack, it was written by the Italian composer Dario Marianelli in a classical style modeled after Beethoven’s early piano sonatas. The movie soundtrack is preformed by the pianist Jean-Yves Thibaudet and the English Chamber Orchestra.

What’s different about the 2005 version compared to other adaptations?

In 1995, BBC produced a television version of P&P (one which many enthusiasts love and adore). The BBC version has a longer run time and follows the plot of the book more strictly. The 2005 motion picture focuses mainly on Elizabeth and Darcy, taking out a lot of the scenes revolving around other characters (like some of Elizabeth’s travels with minor characters and Lydia’s elopement). The 2005 version runs just over two hours, while the longer BBC 1995 version follows the subplots of the book more carefully and runs significantly longer.

Another large difference between the novel and the 2005 film is the setting. The script writer and the director shifted the movie forward by about 20 years, setting it during the 1790s. The director wanted the 2005 version to differ visually from the 1995 version (and apparently he also had a rather large distaste for empire waist gowns). In moving the setting earlier, he was also able to create a bigger distinction between the wealthy and the poor with clothing and the appearance of Longbourn as a working farm.

The more romantic 2005 portrayal of Elizabeth and Darcy’s story still remains bit controversial among Austen enthusiasts. Many Austen lovers prefer the 1995 BBC adaptation because it is indeed more true to the original novel. The 2005 version received rather harsh criticism for the final scene, which portrays Elizabeth and Darcy at Pemberly after they are married, but has little to do with Jane Austen’s original novel. The ending was removed in the UK version of the film for a few months before being put back in. 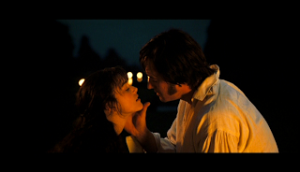 I much prefer the 2005 version over the 1995. I feel that the 2005 version has a lot of romantic and emotional appeal (which I love both in novels and films). I feel that it does a good job of capturing the attention of a more modern audience while still portraying all the important themes of Pride and Prejudice that have made it such a distinguished and time honored novel.

And just in case you were wondering, my favorite scene is the first time Darcy proposes to Elizabeth, with all that rain coming down and the near tears in Elizabeth’s eyes. My favorite musical score is the theme “Dawn,” but I prefer it with just the piano rather than the full orchestra.

So what about you? Which film adaptation of Pride and Prejudice do you prefer? Do you have a favorite musical score or scene from either of the adaptations? Please share it in the comments below.

Photo credits: The 2005 motion picture version of Pride and Prejudice was produced by Working Title Films. It is believed low resolution screenshots used for the purpose of discussing a film and its contents fall under the fair use provision of the U.S. copyright law.