I’ve had several careers over the years, one of which involved supporting scientists at a major national laboratory.  I love the way their minds work, probing gaps in knowledge, pushing the boundaries of understanding.  While the scientific process we know today–question, research, hypothesis, testing, and conclusion–existed during the Regency, the idea of a career as a scientist was in its infancy.  Those interested in observing natural phenomenon and developing and testing theories were more often called natural philosophers.  That’s why the journal of the Royal Society, Britain’s oldest chartered scientific association, is called Philosophical Transactions.

My favorite brand of natural philosopher is the Grand Amateur.  A Grand Amateur was a man or woman who, by interest, ability, and fortune, made major contributions to the sciences. There was something noble about discovering something new, whether it was a planet or the internal workings of a combustion engine.

On the other hand, if you wanted to make a living at science, you had two choices. One was to lecture or run a laboratory at an established institution. The premier of these was the Royal Institution in London. It began operations in early 1800 to bring attention to advances in science and technology among the public. Lecturers brought in a large audience, some of which, it was hoped, might advance funds for future research that tickled their fancies.  Sir Humphry Davy, the famed chemist, used to pack them in when he demonstrated the use of galvanic electricity and laughing gas.

Your other choice was to discover something noteworthy like a new element or unknown planet or build up such a body of knowledge that the Royal Society would take note and elect you as a Fellow. The Royal Society was nearly 200 years old by the mid-nineteenth century. At the beginning of the century, it comprised both scientists and wealthy peers those scientists hoped would pay to sponsor their work. By 1847, however, Fellows were elected based on their scientific prowess alone.

And if someone in power, like one of those Grand Amateurs who happened to be a baron or duke, took note of your work, you might be referred to the ruler for a knighthood and even offered an annual salary. Often the salary came with the appointment as an officer of the Sovereign, such as in the case of the Astronomer Royal. Even if you weren’t officially appointed to a position, there was the expectation that you would use that salary to allow you to continue working for the betterment of the nation.

Women as well as men pursued scientific interests, although no woman was elected to Britain’s scientific bodies during the Regency.  Even Caroline Herschel, who had been awarded a salary by King George for her discoveries in astronomy, was not granted membership in the Royal Society until 1835, when she was 85, and then it was an honorary membership only.  But even without royal patronage or recognition, women such as Ada Byron (now noted as the world’s first computer programmer) and Mary Anning (who discovered one of Britain’s first dinosaur skeletons) would make their mark on science, and history. 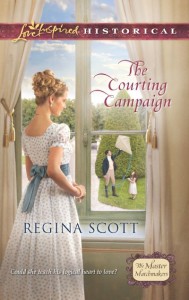 Regina Scott is the author of 25 works of Regency-set romantic fiction.  Her most recent release, The Courting Campaign, features a hero who is a natural philosopher.  You can learn more about her at www.reginascott.com, discover more about the Regency at www.nineteenteen.blogspot.com, or connect with her on Facebook at facebook.com/authorreginascott.