My first Regency was Charity Girl by Georgette Heyer and got me interested in the Regency time period. The book that really hooked me on the Regency romance, however, was Georgina by Clare Darcy. 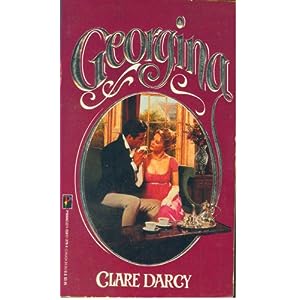 Georgina has all the wonderful elements of a romance that absolutely delight me—delight me to the point that I think I have followed a little in her footsteps in my own romances—books that is, not life—a heroine being courted by just the right sort of gentleman when her heart demands she go after the exactly wrong gentleman. Ah, be still my beating heart for Shannon, a disreputable landowner with mystery and rumors swirling around him. Though I knew I would regret doing so in the morning, I stayed up late to finish this story and was delighted and saddened at the end—delighted with the outcome and saddened that the book was over.

Over the next several years, I read every Clare Darcy book I could find. These were what we now call traditional Regencies. Traditional Regencies are those in the true spirit of Georgette Heyer—comedies of manners with no sensuality other than a few subtle comments and maybe a kiss or two, no foul language, and generally appropriate for young women all the way up to old ladies.

All of Ms. Darcy’s books were named for the heroine, except for one named for two females, one I just learned of today, as I did some research on this post. They ranged from countryside frolics, to country house romps, to balls and adventures. The heroines usually had minds of their own without being anachronistic or too much alike, as far as I remember, and the heroes varied in temperament and social position, though all were at least gentry class.

When I started looking at writing Regencies myself, I asked a few people about Ms. Darcy. Who, exactly, was she and why didn’t she gain more acclaim in the genre? I discovered that Ms. Darcy was highly respected amongst true Regency devotees, but her person was  pretty much unknown. Some even hinted she might be a he.

According to Wikipedia now, ten years later, Ms. Darcy was an author from Ohio named Mary Deasy (1914-1978). Her papers are in the Boston University research library. This is the most information I’ve been able to find out about this author who, like Ms. Heyer, died before ever I read one of her books. Also like Ms. Heyer, Ms. Darcy was a powerful influence on me becoming a Regency writer.

If you haven’t yet picked up Georgina, Eugenia, Lydia, Cressida, Lady Pamela, or any of the other delightful books by Ms. Darcy, you are in for a treat when you do.