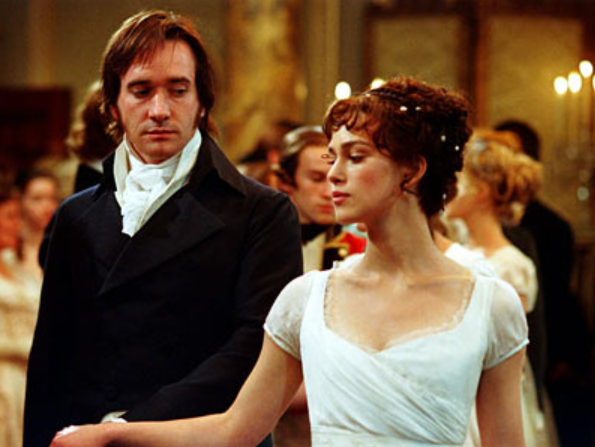 Gentle Readers, I’d like to take a moment to introduce you to the newest member of the Regency Reflections family! You can learn more about Kristy L. Cambron on the Blog Editor bio page. We’re so excited to have her with us. Welcome, Kristy!

I love the power of dance to drop a layer of enchantment over a room.

I can recall one of the first things I said to my husband on our wedding reception dance floor. The lights had been dimmed and as the notes of our special song played, I whispered: “And my dance card will always be full...”

I meant it. For all the years my husband and I would share after that moment, I knew my future dances would always have a special partner.

Stunning dresses. Dapper gentlemen. Ladies hidden behind their fans. Lively music and sophisticated steps… Today that all-important first dance may be synonymous with the wedding celebration, but the Regency ballroom was just as alive with color and spirit as our reception dance floors are today.

Though weddings were primarily private family affairs in the Regency (as opposed to the social events we see today), ballrooms and wedding parties alike were brought to life by vivid dance reels and lively music. After all, the ball was the social event by which all others were judged. Moreover, to grasp a partner’s hand in dance was often the only socially acceptable touch between an unmarried man and woman.

Affection was born and engagements followed, all over the steps of the most popular dances of the day… 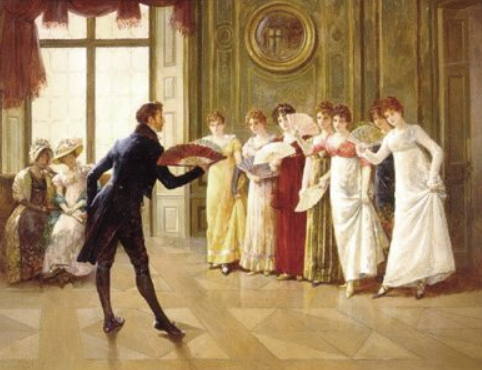 Distinguishing characteristics: Originated in France during the 18th century. Includes four couples dancing in square formations with elaborate steps and changing partners. French for petticoat, the term cotillion was said to have been coined after the flash of petticoats that could be seen as partners swiftly changed on the dance floor.

Interesting Fact: Georgette Heyer’s historical romance, Cotillion (1953), is one of her much loved Regency novels. Though a generally cheery novel, the title is mirrored in a story that centers around the overlapping love lives of four couples (much like the steps of the cotillion dance itself).

Distinguishing characteristics: Another dance import from France. Similar to the cotillion, it includes four couples dancing in square sets but omits the repeating “chorus” dance. Was later combined with the popular waltz to form a hybrid of the two dances, the Waltz Cotillion (as seen in this video – click HERE).

Interesting fact: Introduced early in the Regency and immensely popular by 1815, the quadrille was a very lively dance that often adapted music from stage plays and was thought to be quite flirtatious at the time.  A form of the quadrille can still be seen today in modern day square dancing. 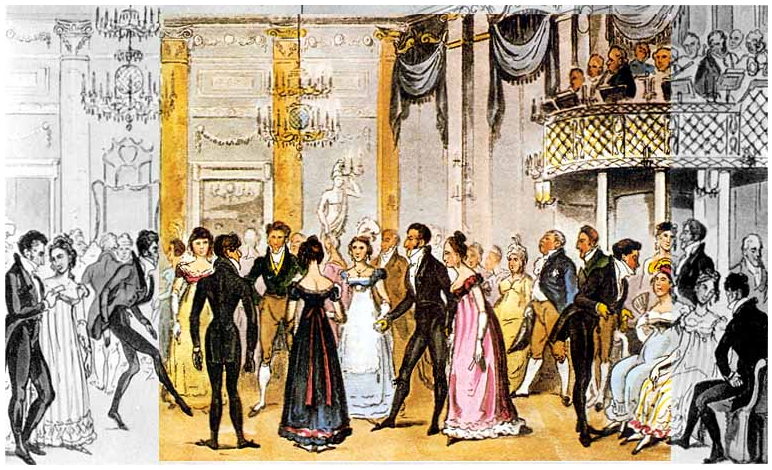 Distinguishing characteristics: A simpler dance for three couples. Often used as the last dance of the evening at a ball or party.

Interesting fact: As many dances could include quite intricate steps, dance masters were often hired by wealthier families to educate their children on the art of the popular dances. (A very popular dance master of the day was Thomas Wilson, who published many influential books on the art of dancing and etiquette.) For you Jane Austen fans, la Boulanger was a favorite of the authoress and was a dance declared by name in her novels.

Distinguishing characteristics: First popular in Vienna (1780s) but introduced to the English ballroom during the Regency. New sensation but slow to catch on because of the “closeness” enjoyed by two dancing partners.

Interesting fact: The waltz caused a bit of a scandal when it first popped onto the English ballroom scene around 1810. Because of the close proximity shared by two dancing partners, the embrace was thought improper and in fact, was often ridiculed by early opponents. In 1825, the Oxford English Dictionary actually defined the waltz as “riotous and indecent”. (Boyd Hilton, A Mad, Bad, and Dangerous People? England 1783–1846 (Oxford U P 2006). 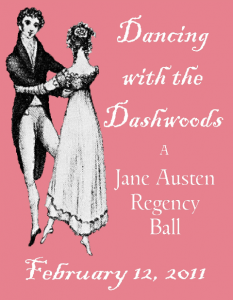 Feet tapping for more references? Here are some good ones:

Click [HERE] to see an example of a stunning Regency Era ball gown.

Click [HERE] to learn more about Regency dances from the Jane Austen Centre at Bath.

Whether it was one of the English country dances with the fun names (such as the “Teasing Made Easy”) or the classic Minuet, our Regency friends certainly knew how to fill up their dance cards.

May we always find ours full as well.