Everyone screws up occasionally. The epicness of your less than perfect moment can often be tied to the significance and size of the event at which it occurs. Stepping on your hairbrush and wiping out in your bathroom can be excessively painful, but the embarrassment factor is rather low. Tumbling down the ramp at your high school graduation can haunt you for the rest of your life, leading the highlight reel at every class reunion.

Kristi here and there is perhaps no grander stage to mess up on than a wedding. Emotions are high, stress abounds, and months (sometimes years) of careful planning is being set in motion. While everyone is praying for four perfect hours of ceremony and reception, that is rarely the case.

Check around on YouTube or watch a few episodes of America’s Funniest Videos and you’ll be able to start a list of common wedding maladies:

Sometimes it’s the groom, often it’s a groomsman. Every now and then it’s the bride. Funniest one I’ve ever seen? The priest.

If you go to a lot of weddings, you’ve probably seen a fainter. They start to blink and then sway just a bit and then next thing you know, their knees give way and everyone does their best impression of dominos. (By the way, if you’re in a wedding make sure you eat breakfast that morning and don’t lock your knees. That lessens your chances of becoming the fainter!)

You can see some great faints in this video. Most of them are from weddings.

I have considerable experience with this one. I was one.

As the flower girl for my cousin’s wedding, I thought I was hot stuff. Unfortunately, I almost became really hot stuff when I became curious about what would happen if I stepped on the base of an enormous candelabra. No, I didn’t burn the church down, but I think I caused a moment or two of horror.

Kids  are adorable and make for some really cute pictures, but they are also unpredictable. You never know when they’ll decide to eat the flower petals or obtain a massive case of stage fright. 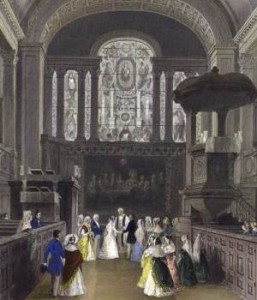 There are many other opportunities to embarrass yourself at a wedding (and given the propensity of brides to hire photographers and videographers, these moments are captured for posterity). Even if you are only a guest, you aren’t immune to being caught up in the wedding disaster hall of fame. Dance floor escapades, bouquet toss brawls, and unplanned toasts are all fodder for the awkward situation generator.

Got a few guests who’ve indulged too much at the open bar? The chances of chagrin inducing capers increase exponentially.

I have to say, though, that I’ve never heard of someone else having the same experience as I did. I’ve heard of flubbed up vows, tongue-tied grooms, and ministers forgetting their notes, but I think I’m fairly unique in my story.

Fortunately, it wasn’t me, although I nearly caught the giggles, which would have made the rest of the ceremony very difficult.

What happened? Well, the minister called my husband a woman. He said, “Do you, Kristi, take this woman…” I very nearly lost it. In his defense, the poor man was very nervous. As a dear friend of the family, he was worried about making a mistake in the middle of the wedding. And then he did.

His own daughter is getting married this weekend. I don’t think he’s officiating the ceremony.

Have you been to a wedding where things didn’t quite go as planned? What hilarity ensued at your own wedding?