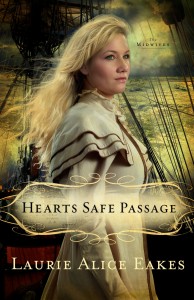 I recently had the privilege of reading Heart’s Safe Passage by one of our fellow bloggers here at Regency Reflections, Laurie Alice Eakes.

Here’s a little description of the novel:

It seems like every time I’ve turned around over the past year, I’ve been hearing bits and pieces about this book. Before reading it, I knew several things: the hero was a bad boy on a dangerous mission, the heroine was a headstrong midwife, and they went to sea.

Well, the story proved to be much more than a bad boy meets a good girl and they live happily ever after. “Sweeping” is the best word I can think of to describe it. It starts off in Virginia, where the heroine heads to sea against her will and due to the scheming of a cruel sister-in-law. From Virginia, Phoebe’s whisked away to Bermuda, then England, and even France. Despite the wide scope of geography covered in the novel, Eakes does a masterful job creating mood and setting. I felt like I was personally visiting every country she described and living through the War of 1812. Eakes understanding of the American, British, and Scottish mindsets is nothing short of amazing.

Furthermore, the characters of Rafe and Phoebe are richly drawn. Neither is perfect, both make mistakes, and both struggle along the path to forgiveness and redemption. They have so much to overcome both physically and emotionally, that at times I wondered if they would ever make it. But they DID make it, and it’s a wonderful story readers won’t soon forget.

So while the book doesn’t qualify as a Regency in the strict sense, Regency fans will likely enjoy this wide-range historical novel. I recommend picking up a copy soon.